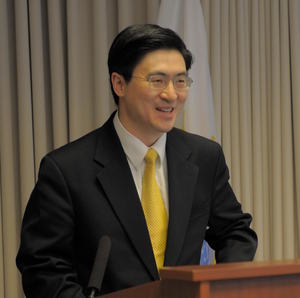 Mung Chiang is the John A. Edwardson Dean of the College of Engineering and the Roscoe H. George Distinguished Professor of Electrical and Computer Engineering at Purdue University. Prior to July 2017, he was the Arthur LeGrand Doty Professor of Electrical Engineering at Princeton University. His research on communication networks received the 2013 Alan T. Waterman Award, the highest honor to scientists and engineers under the age of 40 in the U.S. A recipient of a Guggenheim Fellowship and the IEEE Kiyo Tomiyasu Technical Achievement Award, his research paper citations leads to an H-index of 70 and 23 of his advisees have become professors. He founded the Princeton EDGE Lab in 2009, which bridges the theory-practice gap in edge networking research by spanning from proofs to prototypes, and co-founded a few startup companies in mobile data, IoT and AI with products used by tens of millions of people worldwide. He was also elected to the board of the global nonprofit Industrial Internet Consortium. A recipient of the ASEE Terman Education Award, his textbook “Networked Life,” popular science book “The Power of Networks,” and online courses have reached hundreds of thousands of students.